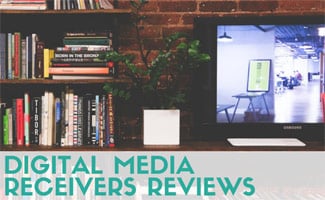 Tired of paying $80+/ month for cable television? Streaming media players are set top boxes that you can hook up to your TV to stream shows and movies from providers such as Hulu, Amazon, Netflix and others. They are becoming more reliable, readily available and affordable. The problem is that there’s so many on the market now, and they all differ in their functionality, service offerings and compatibility. Should you get a media player, and if so, which one?

Why Would I Want A Streaming Media Player?

As you’ve probably noticed, most network content providers (ABC, CBS, CNN, CW, FOX, MTV, Food Network, Bravo, etc.) are offering their content online, so you can stream and watch full episodes of shows you may have missed or forgotten to record. Some networks stream the shows from their websites directly (ie. “Survivor” episodes can be viewed on CBS.com), and others offer their content through aggregate networks such as Hulu.com, that have signed contracts with certain network providers.

The drawback, of course, is that watching TV shows on your PC isn’t quite as comfortable as kicking back on your couch and watching them on your television. And not everyone is savvy enough to know how to hookup their laptop to their television set (and even for those that do, the interface is not as slick as with a dedicated media player, nor do you usually have access to a remote).

This is where the streaming media player (also known as digital media receiver(DMR), media extender, digital media adapter (DMA), media player, network media player, multimedia player, media server, etc.) comes into play. Media players are set top boxes that you plug into your television set or projector. They are preloaded with software that organizes and streams TV shows and movies based on some of the network service providers mentioned above.

These devices are gaining more attention as people are realizing they can get most or all of their favorite TV shows and movies either for free (with advertisements), or on a per-show or season pass basis (costs range from $0.99 and up for a show to $10+ for a season pass). Only in the 5 years or so have these boxes become reliable enough to offer a service that can compete with cable television providers, which is why cable TV companies are sweating the big one right now, and losing subscribers at an unprecedented rate.

Does A Streaming Media Player Offer Everything My Cable Service Does?

A media receiver offers access to pre-recorded tv shows and movies. Here are some of the pros and cons of a typical media player:

What About Live TV?

The major drawback with media players is that most of them don’t include a digital tuner or antenna, which is what’s needed to process and view television signals broadcast over the air. However, with the cost of a month or two of your cable subscription, you can purchase and add these to your setup. They will let you watch live TV, in HD (depending on where you live), from network providers such as ABC, CBS, PBS, CNN, CW, FOX and others.

What Channels Will I Get in My Area?

You can visit the FCC.gov website to find out what channels you’ll get in your area, and how strong the signal is you’ll receive. Depending on the type of antenna you purchase, you’ll be able to receive more or less of these channels.

Here’s some antennas we recommend, based on varying budgets.

What is the Best Streaming Media Player?

Now that you have a fair grasp of how digital media receivers work, and how you might be able to view live TV as well as all your favorite shows and movies, in HD, without having to pay $80+/ month to your cable provider, the question begs: which one to get? Read our media player showdown for the juicy details.

Do you use a streaming media player in your home?

About The Author: Alex Schenker

Alex holds BS degrees in Management Science from the University of California at San Diego, and Computer Science from the New Jersey Institute of Technology. He is honored to share his nearly two decades of experience in home security and automation, cybersecurity and identity theft protection with our readers.

He realized it was time for a home security system when his neighbor’s house got broken into. He has tried to stay ahead of the curve by proactively applying security technologies and software that protect not only his home and family but his personal identity, sensitive information and finances.

In his spare time, Alex enjoys playing tennis, going on hikes with his wife and dogs and surfing.

newest oldest most voted
gadgetry geek
I have to say that the assortment of digital media receivers is getting better, and they’re offering more and more solid content. But the lack of quality sports coverage/ support (the closest equivalent on a media receiver besides the NBA or NHL channels is PlayON ESPN3, which barely works) makes me lean towards cable tv. And with all the on demand/ VOD channels on direcTV now I can’t imagine it will be long before the cable tv’s become viable competitors in the online/ on demand space again?
Vote Up0Vote Down  Reply
Goat
The other poster works for the cable company.
Vote Up0Vote Down  Reply
xbox fan
Why wasn’t the XBox 360 included in this list? The PS3 was?
Vote Up0Vote Down  Reply
Kimberly Alt (Admin)
Hello, I’m sorry but I’m a little confused. The XBox 360 is mentioned in this article and the PS3 is not mentioned. Did you mean the Best Media Streaming article?