Fitbit vs Jawbone: Who Wins The Race? 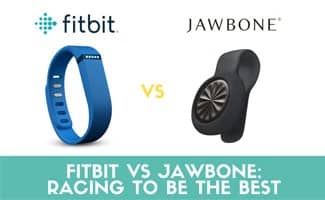 Looking for a convenient and cost-effective way to reach your fitness goals without the expenses of a personal trainer? Enter Jawbone and Fitbit! It’s easy, just set goals for yourself and meet (or exceed) them. Your friends can hold you accountable as well because you can share your data with them. Track your progress including distance, calories burned, steps taken and more. But which one is best? Read on to find out which activity tracker comes out on top when we compare Fitbit vs Jawbone.

What Is An Activity Tracker?

Jawbone used to be a major player in the fitness tracker world. But it is no longer being made. So, you can count on Fitbit to handle your workouts, motivate you to get up and move, not break the bank and more.

Fitbit offers multiple forms to help you get answers to your questions. Fitbit has how to videos, a help center and community forums for you to search through before contacting them. And if that doesn’t work, you can contact Fitbit directly via live chat, phone, email and Twitter. We have contacted Fitbit directly with issues (as well as many friends and family members) and all of us have had great experiences. Fitbit has sent many people we know replacement activity trackers when something has gone wrong.

Jawbone, on the other hand, only offers email and FAQs for support options. However, they still have good support, but since there aren’t as many options for customers to reach Jawbone, we have chosen Fitbit as the winner for this category.

Price was a difficult category for us to choose a winner for. While Fitbit offers nine activity trackers, Jawbone offers four. However, these bands vary in features. We chose our winner for this category by comparing bands of similar price against one another. While doing so, Fitbit had more features than Jawbone did for the various price points, which is why we’ve chosen Fitbit as our winner for this category by a hair.

Winner: Fitbit (By a Hair – View on Amazon)

Fitbit and Jawbone bands are water resistant but should not be submerged. (We don’t recommend you wear these while showering.) Both companies have had issues with bands tearing and/or breaking.

Fitbit users complain about the clasps coming unlatched, which means the Fitbit may fall off unknowingly (this problem has been mostly resolved with newer clasp designs).

Jawbone users complain of the caps falling off, which results in losing their tracking device.

While these things don’t happen to every Fitbit and Jawbone user, it happens more than we’d like to see. The durability could improve for both companies, but because Fitbit has worked hard to resolve this issue, we choose them as the winner for this category.

Fitbit and Jawbone have two different designs to them. Fitbit, for the most part, has a watch-style look to it, while Jawbone has no display to it. You may have a preference of one over the other.

Because of these things, we’ve chosen Fitbit as the winner because of it’s ability to tell time, blend in with your outfit and give immediate feedback.

Fitbit has a wide selection of data to help motivate you to achieve your goals.

Jawbone had a Smart Coach that not only delivers measurements, but also shows you what those numbers mean. Jawbone turned the raw data into your own fitness advisor. For example, if you sleep in a couple days you may take fewer steps. So, it would suggest that you take more steps on those days since you slept in. Jawbone was great at taking your data and turning it into something more meaningful.

However, since Jawbone is no longer in business, we recommend Fitbit.

Below is a chart showing the different options from Fitbit and Jawbone.

We chose Fitbit as our winner and more specifically, the Fitbit Charge 2 is our favorite activity tracker from Fitbit. Learn more about it in this video below.

Still not sure if Fitbit or Jawbone are going to work for you? See our large comparison table to find out which activity tracker is best for your fitness program. Some bands are great at tracking your swimming or monitoring your heart rate while others hold you accountable and assign punishments (YIKES!). Each band specializes in something, so find out which one can help you take the next step in your fitness goals and keep us posted!

What activity do you want to track with your fitness tracker?

There are so many different activity trackers out there but I’m trying to narrow it down to one of these and yet there are still so many models to choose from. I definitely want a wristband one since I’m afraid the clip will come off however I think I’m torn between which one. Anyone have experience with these and mind sharing which is their fave?