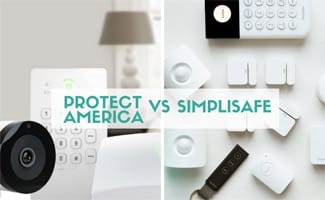 Protect America and SimpliSafe offer wireless home security systems that you can install without a professional’s help. What it ultimately comes down to is what type of home you live in.

If you live in an apartment or are unsure how long you’ll reside at your current residence, SimpliSafe may be a better option because there are no long-term commitments.

However, if you live in a secluded place with less reliable cellular and internet connections, Protect America may be a better option because you may need landline monitoring.

We’ll help you determine which of these companies could be a better fit for your home and lifestyle.

Neither company is exempt from negative reviews, but SimpliSafe seems to have more positive feedback than Protect America, and the criticisms are less severe than those found with Protect America.

Below is a table of the types of security equipment each company offers.

Overall, Protect America has a much more extensive equipment lineup. SimpliSafe doesn’t offer any outdoor cameras. This is a huge miss by SimpliSafe, and we’re disappointed it’s taking them so long to come out with one.

Who Has Better Cameras?

SimpliSafe doesn’t have an outdoor camera, which is why only Protect America is in the table below.

Protect America has a lifetime warranty, while SimpliSafe’s is 3 years. Both are longer than the 1-year warranty that many competitors offer.

Both systems perform well and do what they say they will do. SimpliSafe has more complaints about its equipment staying connected than Protect America does.

All of SimpliSafe’s plans have cellular monitoring, which is the most secure form because there’s no concern about a burglar cutting your landline (phone) or broadband (internet) connection.

Meanwhile, you can choose from landline, broadband or cellular monitoring from Protect America. Landline monitoring may be convenient if you live in a remote place with poor cellular coverage and an unpredictable internet connection.

That being said, the Protect America app offers significantly more features and functionality than the SimpliSafe app.

SimpliSafe has a smash-proof system, so if an intruder tries to destroy your system, the police are still alerted. Protect America doesn’t have this feature.

In the end, if you plan on integrating some home automation equipment with your security system, Protect America has more options than SimpliSafe. But if you don’t care about having the smartest home on the block, SimpliSafe has 24-hour battery backup, cellular monitoring for all plans and a better app rating than Protect America.

To see how these two compare in a real-world situation, here’s an example of a common household equipment configuration:

For comparison’s sake, here’s how much it will cost you for 3 years of service. (SimpliSafe doesn’t require a commitment. Protect America locks you into a 3-year contract.)

Protect America gives you up to $1,400 of wireless equipment free, but its cellular monitoring starts at $41.99/month, which is $17 more than SimpliSafe’s. Plus SimpliSafe doesn’t lock you into a long-term commitment.

Both Protect America and SimpliSafe use C.O.P.S. for their professional monitoring. C.O.P.S. has 6 monitoring stations and reportedly contacts you within 60 seconds.

We think your money is well spent with either company. We like that Protect America gives you up to $1,400 of wireless equipment free but wish the cellular monitoring fee was comparable to SimpliSafe since it’s through the same company.

Once you set up the systems, they are both easy to use. The apps are relatively simple to use, although the Protect America app offers significantly more features and functionality than the SimpliSafe app.

If you want a security system that’s easy to install yourself, has excellent customer service and great professional monitoring, Protect America and SimpliSafe are both excellent options.

Ultimately, Protect America has more home automation options and a longer equipment warranty. However, if you want to avoid a long-term contract, you may find SimpliSafe more appealing.

If you’d like to learn more about these companies, read our in-depth reviews on Protect America and SimpliSafe, which include pros, cons, key features and customer testimonials. Both companies are included in our top picks for best home security system too.

Which company are you leaning toward?