Best Stun Guns And Tasers To Zap Your Attacker

Kick your self-defense game up  a notch while you’re out on your own at night or alone in sketchy areas with the best stun guns and taser flashlights for added safety measures. 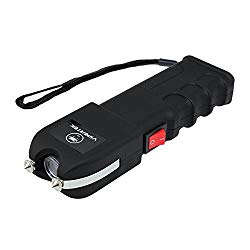 Many people use the terms stun gun and taser interchangeably, but, in fact, they’re not the same type of electroshock self-defense device. Here’s how they work and their major pros and cons for each.

Stun guns require you to be in close proximity to your attacker. These devices use high-voltage electricity to disable your aggressor’s muscle control temporarily. All you have to do is pull the trigger and touch your attacker with the metal prongs. 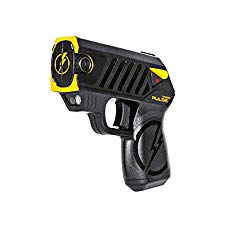 Taser® is a brand of electroshock weapon that uses powerful electrical current to disrupt muscle control and can be used as far as 15 feet away from your attacker. When you fire a taser, it shoots two metal probe darts that are connected to wires.

These darts penetrate your aggressor’s clothing and skin in some cases, to deliver the electrical shock. The Taser brand comes in several different models and delivers 50,000 volts (the same voltage as police issued Tasers). Check out this article if you wish to learn more about voltage.

We’ve separated our “best-of” reviews into three categories, based on the type of device you’re likely looking for. Simply click on a category below or keep reading through all of our reviews.

Stun guns are easily portable, affordable and don’t face legal restrictions from most states. Check out our stun gun reviews below to find one that meets your needs.

Vipertek VTS-989 Heavy Duty Stun Gun is our pick for the best stun gun. Vipertek has an excellent reputation for producing high-quality and reliable self-defense products.

The Vipertek VTS-989 is their best-selling model and gets consistently top expert ratings.

The Vipertek VTS-989 is built for fast action and high voltage — you can turn off the safety and press the trigger button in less than one second because they’re located on opposite sides of the device. And the 53 million volts will bring your attacker down.

The Vipertek VTS-880 V Mini Stun Gun is an excellent option if you’re looking for a smaller stun gun than our #1 pick.

While this mini stun gun delivers a third of the voltage compared to the 989 model above, it still packs an effective punch against assailants.

It’s compact enough to fit in your pocket or a smaller purse and includes the same safety and fast action technology as our top pick.

Stun gun flashlights are handy, dual-purpose self-defense devices if you spend a lot of time in the dark. After all, who wants to carry around a separate flashlight and stun gun?

The Police 305 Stun Gun Flashlight is our pick for the best stun gun flashlight.

This device includes powerful electric prongs and a super bright LED flashlight that’s bright enough to temporarily blind your assailant if you shine it in his eyes.

You can also shoot off a loud crackling warning shot as another line of defense. The built-in glass breaker is a bonus in case of emergencies.

The Guard Dog Diablo Tactical Stun Gun Flashlight is another high-quality self-defense flashlight you should consider. It’s smaller than the Police 305 model and has a unique construction of concealed shock prongs to help with the element of surprise.

The Diablo also has three light settings, including a bright strobe that will blind your attacker momentarily. It also makes a loud zapping sound for added deterrence.

What are the best tasers for women (or men) to carry around with them for self-defense? Unfortunately, you don’t get the option of a pocket taser. Tasers are bulkier and not as easily portable, but you get the added safety of discharging from a distance.

Here are our top picks. See below for legal restrictions in some states.

The Taser Pulse gets our top nod as the best taser gun for civilian use for its functionality, durability and pricing.

Coming in at just under $300, the Taser Pulse is far less expensive than most other Taser models but with the same quality and reliability. The 15-foot safety range and sustained 30-second shock make it a safer self-defense alternative to stun guns.

The Taser X26C is the real deal self-defense device. Like the Taser Pulse, the X26C delivers a sustained 30-second shock from as far as 15 feet away.

This self-defense Taser holds one cartridge in the chamber, and you can clip a second cartridge to the handle for a fast replacement if needed.

You get six cartridges, a hard body holster and a practice target with the X26C. See below for legal restrictions in some states.

Where Are Tasers Legal?

Tasers are legal in most states for self-defense purposes. Where is carrying a taser illegal? Here’s a list of restricted locations but be sure to check your state laws as they may change.

Tasers are illegal to own or carry in:

Only legal in your home:

Where Are Stun Guns Legal?

Stun guns are legal in all but four states. Stun guns don’t face the same licensing and legal restrictions that Tasers do in other states.

How Do Tasers And Stun Guns Disable Your Assailant?

How does a stun gun or Taser’s electronic shock disable your aggressor? Check out the video below, which explains the science behind the stun.

Tasers and stun guns provide the first line of defense. Even though they’re not guns, they can still cause serious damage and should be kept away from children. Read our article on the best gun safes to keep your weapons safely stored away for when you need them, and learn how to educate your kids on gun safety.

Would you feel safer carrying a stun gun or Taser?