Crime Statistics: What Are My Chances Of Becoming A Victim? 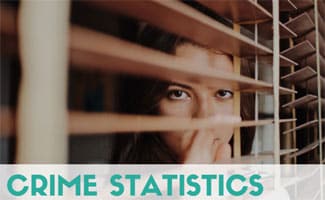 Most people are afraid of break-ins at night while they’re sleeping. In fact, most home burglaries occur between the hours of 10am and 3pm during daylight hours while people are at work or running errands.1 Burglary rates are highest in summer and lowest in winter.2

Home burglary rates have continually decreased over the last five years, but rates are still high. Just how often do robberies occur?

In 2018, a burglary occurred every 25.7 seconds in the U.S. (this includes residential and non-residential break-ins).3 Here are some of the most recent residential burglary and home security statistics:

Keep in mind, these lists only include the cities that report crime statistics to the FBI any given year — many don’t, including major metro areas like Chicago, Dallas, and New York to name a few (the D.C, Los Angeles, Boston, and Miami metro areas did report stats in 2019).

We noticed with our analysis this year with the 2019 FBI Crime Report that some cities that appeared on our high-crime rankings in past years weren’t included in the FBI report this year, including Philadelphia, PA, and Mobile, AL.

Cities With The Highest Burglary Rates

Cities With The Highest Murder Rates

These include both murder and nonnegligent manslaughter.

The following statistics also come from the FBI’s 2019 Crime Report.

Both the number and rate of violent crimes decreased in 2019 from the previous year.

The total number of murders increased from 2018 to 2019, but the murder rate dropped slightly. These FBI murder statistics are based solely on police investigations as opposed to the findings of a court, medical examiner, coroner, jury, or other judicial bodies.

When it comes to murders, the South prevails. Here’s the FBI’s regional breakdown of the estimated number of reported murders in the United States:

Law enforcement agencies continue to increase their reporting of hate crimes every year to the FBI. The 2018 FBI hate crime reporting system (the latest released) received reports of 7,120 hate crimes in 2018, down from 7,175 in 2017. These break down to:

We were interested to see how different crime rates vary by race and ethnicity throughout the U.S. The following table represents the percent distribution by race, based on arrests made in 2019. The last two columns are by ethnicity.

There are no formal reports of crimes committed by undocumented immigrants, but a recent analysis by The Marshall Project sheds the best light to date of how illegal immigration may have affected crime rates in the U.S. since 2007.6

What crimes are you worried about in your city or neighborhood?