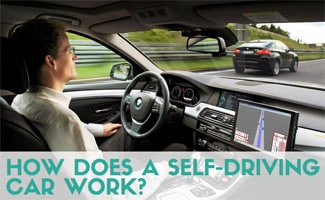 How Does a Self-Driving Car Work?

Designs vary by company, but most self-driving systems create an ongoing internal map of their surroundings using a variety of sensors, like radar, laser beams and sonar. The main computer’s software processes the data from the sensors and transmits instructions to the car’s actuators, which control steering, acceleration and braking. The software uses advanced coding, algorithms and predictive modeling to avoid and navigate obstacles in the road and to follow traffic rules. These systems also use smart object recognition to distinguish between a bicycle or a pedestrian, for example.

So far, several prototypes have been rolled out. Uber self-driving cars, for example, use sixty-four laser beams and other sensors to build their internal maps. And at different stages of development, the Google autonomous car has used radar, sonar, lasers and high-powered cameras.

The race for fully autonomous cars is on! Most of the big-name car companies, like Mercedes-Benz, BMW, Ford and Honda have self-driving technology in the works through their own labs and partnerships with tech companies, like Google, Apple, Uber and others. Waymo (formerly Google self driving cars) is a subsidiary of parent company Alphabet that focuses on self-driving technology. According to their website, there are 1.35 million deaths worldwide due to vehicle crashes every year, and 94% of crashes involve human error. Their Waymo One ride-hailing technology (think Uber and Lyft) is now available in San Fransisco, CA and Phoenix, AZ.

For a variety of reasons, including regulatory approval, completely self-driving cars aren’t ready for the commercial market just yet — they’re likely still a couple of years down the road. But, in the meantime, many car companies are implementing autopilot systems that incorporate some of the self-driving car technology we described above.

What Cars Have Autopilot?

There are several cars with autopilot technology now available if you can’t wait for fully autonomous cars to hit the market.

There are over a hundred models of cars that offer adaptive cruise control and lane-centering steering. But we don’t consider those true autopilot technology.

Check out the video below by tech company Nvidia demonstrating their automated computing system on the road. Nvidia Drive’s PX 2 is a powerful, open AI car computing platform for use in automated and autonomous vehicles. Tesla incorporates Nvidia Drive PX 2 system in all of its new vehicles.

What Can We Expect Down the Road?

Self-driving, autonomous car technology is here to stay. Check out our picks for the best self-driving cars available today.