Are you looking for a basic or more elaborate home security system? Both SimpliSafe and Vivint can provide security for your home, but the two have vastly different offerings.

SimpliSafe offers a more simple security system at a lower cost. Meanwhile, Vivint has added features, like home automation, that you may be willing to pay extra for. Compare the two head-to-head and decide which aligns more closely with what you want.

The BBB (Better Business Bureau) can be a reliable indicator of how a company handles consumer complaints. How do our two companies fare?

Not being accredited by the BBB is pretty rare in the home security industry. It isn’t necessarily a red flag to not be accredited since some companies choose not to seek accreditation. However, the fact that a company the size of Vivint is not accredited, combined with their B- rating, doesn’t make them look good.

No company is immune to negative customer feedback. However, SimpliSafe tends to have more positive reviews than Vivint, and the criticisms aren’t as severe as those we found for Vivint.

We’re disappointed that SimpliSafe doesn’t offer an outdoor camera, especially since this is a standard device used to catch criminals. This could be a deal-breaker for some customers.

Both SimpliSafe and Vivint manufacture their own wireless equipment.

SimpliSafe has a three-year warranty for all equipment at no additional cost.

SimpliSafe and Vivint systems perform well. They each have complaints about equipment not staying connected or not working as expected. However, SimpliSafe’s equipment is more basic than Vivint’s and lacks an outdoor camera, which gives Vivint the edge here.

Suppose you lose power (during a storm or by a burglar cutting wires). In that case, a battery backup will keep your system online for a set amount of time until the power is restored. SimpliSafe has a 24-hour battery backup, while Vivint’s is only four hours. Our experts cover home security battery backup technology in detail in case you’d like to learn more.

Cellular monitoring is more secure than landline and broadband (internet) because there’s no concern about a burglar cutting your wires. All of SimpliSafe and Vivint’s plans have cellular monitoring. 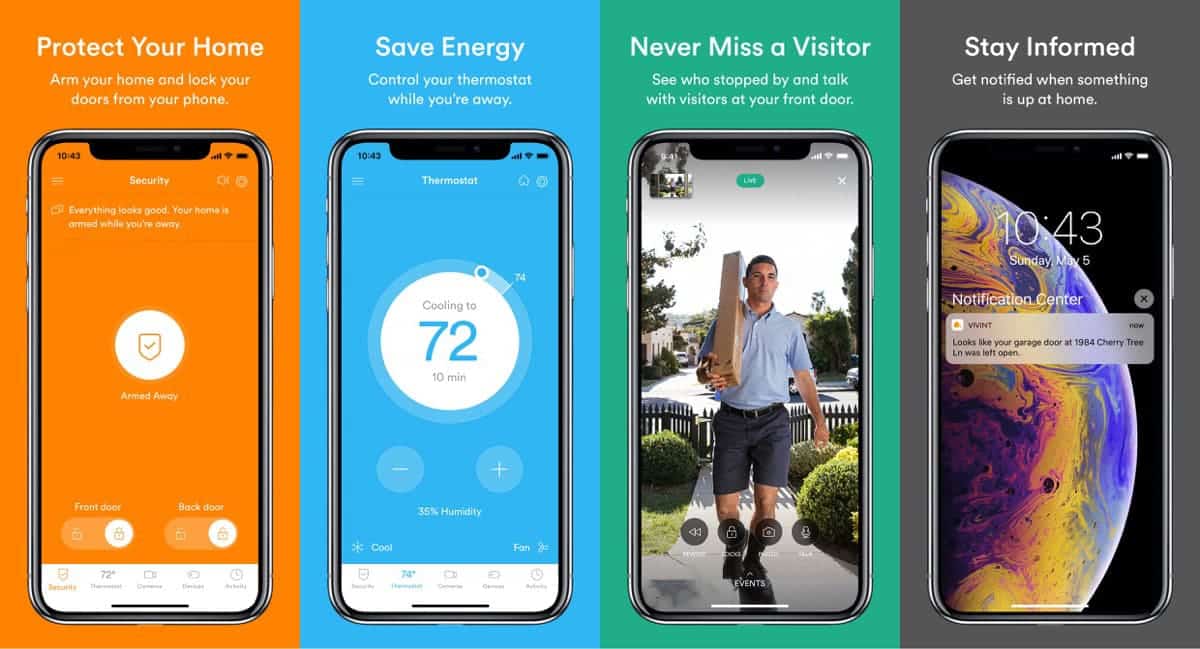 Vivint has many more home automation integrations than SimpliSafe does, and it’s known for its smart home capabilities. Both apps have some of the best ratings we’ve seen. We wish Vivint’s panel had more than four hours of battery backup since the standard is 24 hours. However, many power outages are resolved within four hours. Vivint wins this category by a hair, but we wish its battery backup was 24 hours.

To see how these two compare in a real-world situation, let’s go over an example of a common configuration in a household with the equipment below:

As you can see, Vivint is drastically more expensive than SimpliSafe. SimpliSafe’s system is more simplistic, but it’s also much more affordable.

After setup is complete, both systems are easy to use. Customers love how simple SimpliSafe is with its wireless, DIY setup. Vivint equipment is wireless, but it requires professional installation, which means you’ll need to schedule a time for a professional to come to your home.

Ease Of Use Winner: SimpliSafe

The target audiences for SimpliSafe and Vivint are drastically different. SimpliSafe is excellent for those of you who are comfortable with installing a system yourself. Additionally, if home automation isn’t a top priority, you want to avoid a long-term contract, and you want more affordable monthly monitoring, then SimpliSafe is a great option.

However, for those of you wanting professional installation, advanced home automation integrations, more equipment options, and are okay with being locked into a four-year commitment, then you may prefer Vivint.

If you’d like to learn more about these companies, read our individual reviews on SimpliSafe and Vivint, including pros, cons, key features, and customer testimonials. Both companies are included in our experts’ reviews of the best home security systems.