What Are The Most Dangerous (And Safest) States For Driving?

What are the most dangerous and safest states to drive in the USA? Can you guess where your state falls? We all have a perception of how risky our fellow drivers are on the road, but are your concerns backed up by the stats and facts?

We also conducted a unique analysis of Google search trends about car accidents by state over the last year vs actual fatal accidents per state, based on 2017 NHTSA traffic fatality and U.S. Census data (the most recent data available). And we found some compelling results.

Mississippi topped the list as the most dangerous state to drive in for the second year in a row — and had among the fewest Google searches over the last year regarding car accidents and safe driving.

In contrast, Minnesota was the 3rd safest state for driving and had the highest number of Google searches for traffic accident concerns.

Most Dangerous & Safest States For Driving

We based our rankings on the most recent data we could find – NHTSA 2017 traffic fatality data and 2017 U.S. Census estimates to determine rates per capita for each state. Rankings reflect the rates of vehicle crash deaths per 100,000 residents.1,2

Don’t see your state in the top 10 rankings? See below for how all 50 states rank.

Highlights Of Ranking Changes Between 2016-2017

Most states in the top 10 most dangerous and top 10 safest states from the 2016 data remained in the top 10 in 2017, only gaining or losing a few spots in the rankings. But there are two noteworthy exceptions:

What State Has The Most Fatal Car Accidents?

In 2017, California had the highest number of traffic fatalities at 3,602 deaths, but the Golden State ranks as the 12th safest state when you factor in its high population.

Which State Has The Fewest Fatal Car Crashes?

On the other hand, Vermont had the lowest number of traffic fatalities in 2017 at 69 deaths, but the Green Mountain State ranks as the 28th most dangerous state given its low population.

Most Dangerous And Safest States For Driving Infographic 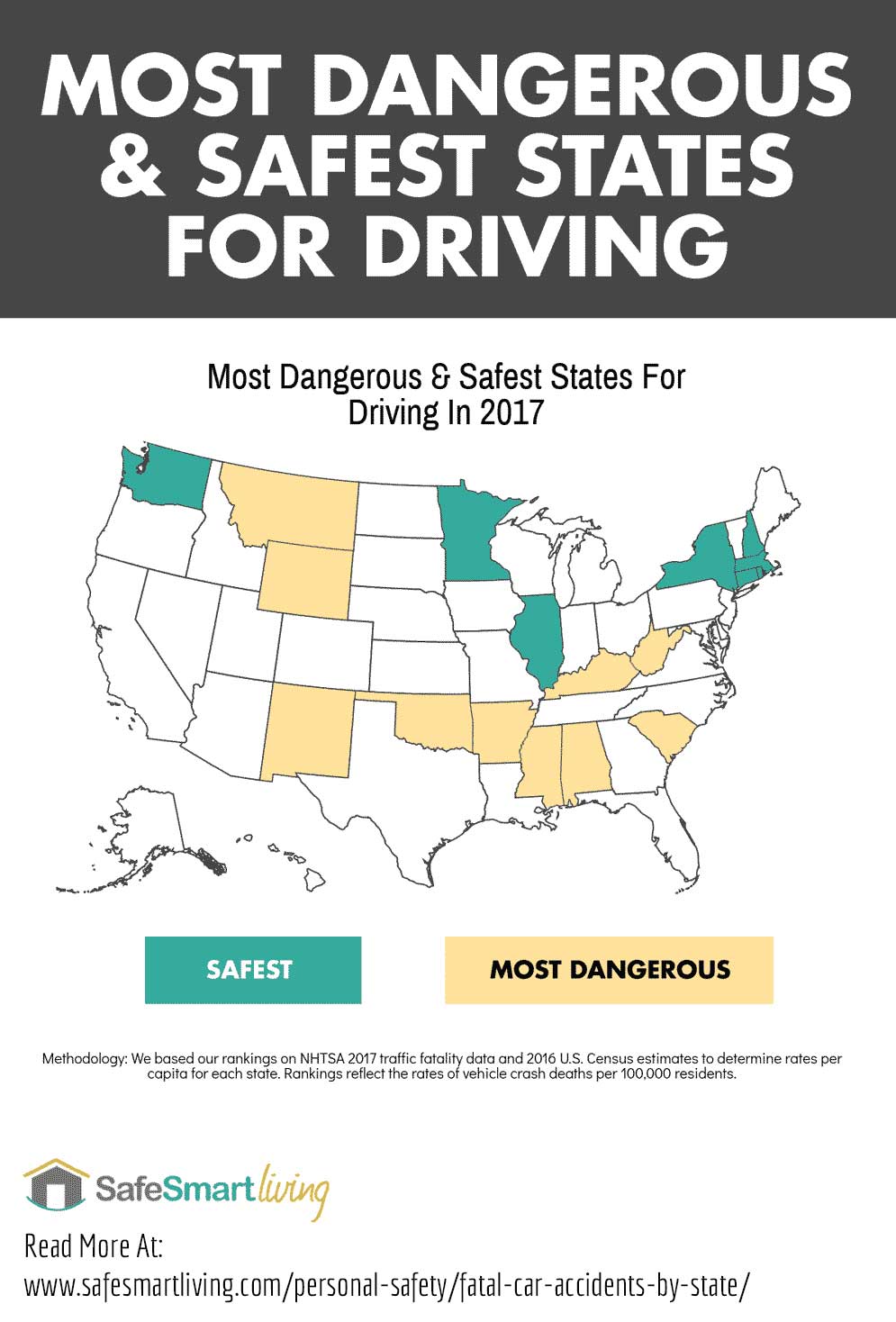 Who’s Most Concerned About Driving In The U.S.?

Overall, the most noteworthy trend we found was that state residents who lived in the top 10 worst states for driving had far fewer Google searches about driving concerns and safe cars than their counterparts. Alternatively, many of the safest states to drive in had among the highest volumes of Google searches.

These findings raise some interesting questions. In general, are people who seek out information about driving-related concerns more safety-conscious on the road? Or, in the case of Florida and Georgia, are they searching for information because their fellow residents are unsafe drivers?

The following states had the most Google searches over the last year about traffic accidents and fatalities.

These states had the highest number of searches for safe cars and driving safety over the last year.

Here are some noteworthy national statistics on fatal traffic accidents:1

Where Does Your State Fall?

Tips To Stay Safe On The Road

Even if you follow all the best safety practices while you’re driving, you can’t control other drivers and unexpected incidents. Is there anything you can do? Yes; become a defensive driver!

The video below has some excellent initial tips to help you stay safe when conditions are beyond your control. Also, consider taking a defensive driving course.

Which factors contribute to the most traffic fatalities? Alcohol-impaired drivers, speeders and distracted drivers (we are looking at those of you who text while driving!) are the biggest culprits. If you’re concerned about DUI fatalities and arrests in your area, be sure to check out our article on drinking and driving by state.

What worries you most about unsafe drivers where you live?