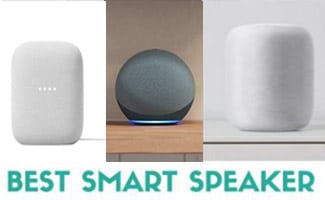 How do you want to use your smart speaker? Do you plan to use it with other apps, have your own personal DJ, learn a wealth of knowledge, or something else?

Your answer to this question will determine the best smart speaker for you. We’ve taken a stance on which one we think is best, but that doesn’t mean the other speaker might not be a better fit for your household and voice assistant needs.

Who Has The Best Smart Speaker?

Below are the factors we reviewed to choose between Google Nest, Amazon Echo, and Apple HomePod. Be sure to read below the table to see why we chose a particular winner for each category.

Google Nest, Amazon Echo, and Apple HomePod have the same price points. Google Nest is priced at $99, Amazon Echo is $99.99 , and Apple’s HomePod costs $299 (but they have a mini version for $99). Google also has Nest mini for a lower price point and a higher-end Max.

Amazon sells a smaller version of its speaker (Echo Dot) for $49.99 . If you’re looking apples to apples with the mid-range starter speaker, it’s a three-way tie. However, Amazon and Google have lower-priced models, which gives them an edge.

The table below shows some features for Google Nest, Amazon Echo, and Apple HomePod. Be sure to read the sections after the table for further clarification.

IFTTT stands for “if this, then that,” which means if you command for something to happen, another command will occur.

For example, if you adjust the smart thermostat to a certain temperature, all the smart lights will shut off. Of course, this is only possible if these devices connect to each other.

Google and Alexa each have their own apps. (Apple HomePod does not have an app.) The Google Home app and the Amazon Alexa app mirrors interactions with your smart speakers. For example, if you use the speakers to manage your music, you can see it displayed through the app.

Amazon’s app was rated a bit lower than Google’s in the app stores but has a ton of integrations. Echo has been around two years longer than Home, so it has had time to develop those third-party integrations. However, Google Nest has caught up and included hundreds of more integrations. We think Echo has the edge when it comes to integrations.

All three are easy to use, but which one responds to your requests better? From our research, Amazon is smarter and is less confused by questions than Google. What do we mean by this? If you ask both devices a question, you’re more likely to get the answer the first time from Amazon. You may have to rephrase your question to Google, and you may not get an answer at all from Siri.

We like that you can ask Google a second question without repeating the keyword phrase. What we mean is that you can have a more natural conversation without repeating a keyword. For example, you should be able to ask Google Nest “When was Abraham Lincoln born?” then, after you receive an answer, ask, “Where was he born?” without having to repeat his name, which would be a keyword. You could then continue to ask questions about Abraham Lincoln without ever repeating his name as if it is in one fluid conversation.

Google Nest remembers the question you previously asked as if it was a conversation with a real person. Amazon Echo and Apple HomePod cannot do this.

When you ask Amazon Echo to purchase a product for you on Amazon, that’s all it can do. It cannot tell you the latest reviews or other prices, which most of us do when purchasing a product. Most of us probably won’t purchase through Amazon Echo without checking out the competition. However, Google Nest and Apple HomePod don’t give you the option to purchase an item through Amazon, so it’s a catch-22.

Overall, we found that you’re more likely to get what you asked for the first time through Amazon Echo than Google Nest or Apple HomePod.

Google’s speaker looks like a cube and very similar to Apple’s original HomePod. Previously, Google Nest had a unique shape like a large air freshener but has since updated its smart speakers to be more universal. It comes in five colors: charcoal, sky, sand, sage, and chalk gray.

Amazon Echo looks like a ball or dome. There are three color options: charcoal, white, or twilight blue.

Apple HomePod looks like a modern speaker. It’s very simple and sleek looking. It’s available in white and space gray. It is 6.8″ high and 5.6″ wide and looks similar to a Sonos speaker.

We all have our own tastes when it comes to equipment aesthetics, so this one is up to you on which you think looks the best.

As for how durable the equipment is, all three are built with quality equipment. The devices are sturdy and don’t feel like they’re made out of cheap plastic. There have been few complaints about the equipment for these devices.

Concerning sound quality, the HomePod is the clear winner here. They prioritize its sound quality with its seven tweeters, woofer, amplifiers, and bass, which is why it’s the winner for this category.

These smart speakers sound fun, but what about your privacy? Are your conversations going to be recorded 24/7? While all three devices are always listening, they are not always recording.

Each device listens for its key phrase (Ok Google, Alexa, or Hey Siri), and Google and Amazon record and connects to the company server when they are triggered. All three companies encrypt the voice assistant recording, but Apple is the only one that doesn’t connect this recording to your identity.

Google and Amazon keep a log of every request with your voice recording attached. You can opt to delete what you’ve asked Home and Echo. Google Nest has a “stop listening” feature, which is a nice added feature.

Apple HomePod is unique and offers the most privacy. When you ask HomePod a question, the request is not associated with a user’s account (like it is with Google and Amazon). Instead, all questions are anonymous. Requests made to Siri will live with a rotating ID for six months, then another eighteen months, it will live without an ID. In comparison, you must request information to be deleted with Google and Amazon.

Where HomePod falls short is that it’s connected to your phone. As long as you are home, people can send a text through the HomePod or read your notes without your permission. People may not think to do this, and it’s relatively minor compared to the privacy concerns with Google and Amazon.

Overall, we think Amazon Echo is the best in this comparison. According to our research, users can get more of their questions answered and pay a lower amount of money.

Just because we chose Amazon Echo as the winner doesn’t mean Google Nest or Apple HomePod aren’t great products. Home is an amazing smart speaker, and you may opt for it over Echo, depending on your preferences. If you’re a loyal Apple fan or are looking for a smart speaker with great sound, you may opt for HomePod.

You can learn more about the Amazon Echo in our Amazon Echo review. And, if you are looking to add to your smart home arsenal, read this smart home guide for lots of clever ideas to enhance your life.