We’ve all seen it happen to politicians and celebrities: texting and social media posts can wreak havoc on your life if your “private” messages, photos or other shared content falls into the wrong hands. If you want to message without it coming back to haunt you — or you need to share totally confidential info — it’s a no-brainer to use an encrypted messaging app.

Following its acquisition by Facebook, WhatsApp updated its privacy policy. Users in the U.S. had to accept or stop using the service. This does not apply to users in the UK and Europe – but the notification was sent to everyone. Why did this change to their terms raise concern for millions of users?

Because the new terms stated they would be sharing your Whatsapp data with parent company Facebook. What kind of data is being shared? It would not include messages, groups or call logs. However it would include these four pieces of sensitive information:

The result of this action? Millions of users left WhatsApp globally and fled to computing services Signal and Telegram. The traffic influx was so overwhelming that Signal servers crashed.

Why Should I Use Encrypted Messaging?

Your smartphone’s text (SMS) messages aren’t encrypted, but why does that matter?

Any content you include in your SMS message is easily viewable by your mobile carrier and government officials — and highly susceptible to hackers. Even if you’re using two-factor authentication, skilled techies can steal your codes.

What’s more, SMS messages leak metadata. Although metadata doesn’t include information about the message’s contents, it does include the phone number of the sender and recipient. So, if you don’t want anyone keeping tabs on who you’re chatting with, regular texting is not on your side.

Some privacy hawks even worry about a recent ruling by the Federal Communications Commission (FCC) that gives cell carriers more authority to block SMS messages. The ruling’s goal is to reduce SMS spam, but some believe this opens up a can of worms for potential freedom of speech violations.

2 Essential Features For The Highest Security

If you’re messaging financial information or other highly sensitive confidential content, you’ll want to make sure the encrypted messaging app you choose has two key features.

End-to-end encryption is an absolute necessity if you want your messages to stay private. This type of encryption scrambles messages on the sender’s device and doesn’t unscramble them until they get to the recipient’s device.

End-to-end encryption makes it nearly impossible for anyone to see the content of any message — as long as the encryption protocol is foolproof. But as you’ll see in our reviews, most private messaging apps use their own protocol, so they can differ in how secure they are. Still, end-to-end encrypted apps are much more secure than popular apps, like Instagram, Snapchat, Skype and Slack, that don’t have it.

Why does open source matter? Any app can claim to have the best security, but if their encryption coding isn’t open to the public, how sure can you be that it’s consistently safe to use?

An open source platform, however, can be rigorously inspected by independent security experts for faulty coding, bugs and breaches — the same goes for all the app updates that the company releases. Open source apps (that experts verify) give you an added level of confidence that your content is indeed being encrypted continually.

Tip: To ensure the highest level of security and privacy, always update your apps as soon as possible when the company releases an update.

We’ve chosen our top 3 winners based primarily on their reliable encryption capabilities and app performance to give you the most secure and usable options available. We’ve also included each app’s primitive cryptography for our hardcore tech readers. If you’re not as concerned about total privacy, be sure to read all of our reviews to find your best option.

Security experts widely consider Signal by Open Whisperer Systems the gold standard for private messaging. This free messaging app uses automatic end-to-end encryption, is open source and has undergone numerous (and successful) independent audits of its cryptography over the years.

Signal also allows you to verify the identity of your contacts. Each conversation has a unique safety number (often referred to as a fingerprint or key) that allows you to confirm the security of your messages and calls with specific contacts.

This app gives you all of the basic messaging tools you’ll need, including group chats, voice and video calls, read receipts and emoji support. Signal is your best option if you’re looking for super secure messaging, voice, video, group messaging and file sharing. It has native applications for iOS, Android, Mac and Windows PC.

Wire is a Swiss-made encryption messaging app that uses its own Proteus end-to-end encryption protocol that was inspired by Signal. Wire has a robust feature set that’s fully functional on all of its platforms, including texting, audio calling, video calling, file transfers up to 25 MB, group messaging and group calling.

You can also have up to 3 separate accounts to use for different messaging purposes, e.g., personal, work and dating. Wire offers native applications for iOS, Android, Windows, Mac and Linux.

Wire features a free app for personal use and a Pro app upgrade for businesses that starts at €4 per user per month. You can get a free 30-day trial for the Pro version with no credit card required.

U.S.-based Wickr offers the free Wickr Me app for personal use and paid Wickr Pro and Enterprise platforms for businesses looking for company-wide secure messaging. This company is all about protecting privacy and transparency in its open-source software.

Many independent experts have thoroughly inspected and verified Wickr’s encryption strength. The company even offers a ‘bug bounty’ — up to a $100,000 reward to anyone finding potential security vulnerabilities that seriously compromise their encryption.

Wickr Me and its business platforms give you secure texting, voice calls, group messaging and file sharing (but you must pay for the Pro plan to share files over 10MB). It offers native apps for iOS, Android, Mac and Windows PC.

Wickr Me is a free app for personal use. Wickr also offers Pro and Enterprise solutions that start at $4.99 per user per month.

Each App’s Encryption At A Glance

When referencing this table, the more green checks you see, the better for your encrypted privacy.

We’ve also reviewed other popular encrypted messaging apps, some which you’ve probably heard of — did you know that iPhone’s iMessage (the default iPhone messaging app) is encrypted by default?

In stark contrast, Android’s default messaging and chat app, Android Messages, is not end-to-end encrypted (take note Android users!).  Some of the following apps we review are more secure than others, so pay close attention to the pros/cons we provide.

Many Apple users don’t even realize they’re already using encrypted messaging via iMessage, Apple’s default messaging app, but is iMessage enough to protect your privacy? The short answer is no.

iMessage does use end-to-end encryption, but it’s not open source, so no one outside of Apple can review its cryptography. It also doesn’t have contact ID verification. Many experts have cautioned about its security, so we recommend using a different private messaging app.

Telegram is a popular private messaging app with end-to-end encryption, a slick interface, speed and lots of features. One big plus for some users is that Telegram doesn’t limit the file size of media or documents you share. And you can set messages and files to self destruct after you send them.

However, if ultimate security is a necessity, Telegram falls short. While it has open source API for developers, its server-side code is closed source and proprietary. And many experts agree that Telegram isn’t very secure.

If you’re simply looking for an alternate messaging app that you can use and sync on multiple devices, Telegram’s a great option (as long as you don’t need uber encryption). Telegram offers native applications for iOS, Android, Windows Phone, Mac, Linux and Windows PC.

Viber’s encryption is based on Signal’s protocol, but they’ve tweaked it with their own proprietary additions (meaning it can’t be independently audited). Another downside — experts say that Viber’s security underperforms when compared to Signal and other ultra-secure messaging apps. Viber has native apps for iOS, Android, Mac, Linux and Windows PC.

WhatsApp, perhaps the best-known app in our reviews, has now partnered with Signal’s Open Whisperer Systems to add the same top-class encryption methods they use for all their apps (iOS, Android, Windows Phone). So, what are the differences between WhatsApp and Signal?

WhatsApp is the most popular texting alternative, so your existing contacts are more likely already using it. But the downside is that Facebook owns WhatsApp, so you’re putting yourself in the hands of Facebook’s logging practices.

While WhatsApp end-to-end encryption hides your messaging content, Facebook can still collect some of your meta information, like the location of your phone. WhatsApp is available for iOS, Android, Windows Phone, Nokia, Mac and Windows PC. Another difference is that Signal is open source, but WhatsApp is not.

How Does End-To-End Encryption Work?

Check out this brief The Wall Street Journal video that does a great job of explaining in detail how end-to-end encryption works to shield your messages from prying eyes.

Here are questions we receive frequently from our readers regarding encrypted messaging. Don’t see yours? Ask us in the comments.

Are text messages (SMS or MMS) from my phone provider encrypted?

No they are not. Which means they are viewable by your mobile phone company, governments, and can be intercepted by hackers. This is why we don’t recommend using SMS for your two factor authentication (2FA).

Is it possible to encrypt a message in Microsoft Outlook?

For older versions of Outlook you’ll need encryption software. If you are an Office 365 subscriber, however, you do have some encryption options available.

Google states that their chat features utilize TLS (Transport Layer Security) encryption. This means that anyone trying to intercept your messages between you and Google would only be able to see encrypted, unreadable text.

Secure Your Chat Connection With A VPN

Using two-factor authentication whenever you’re online adds an important layer of security for your activity. Another excellent tool is a VPN (Virtual Private Network). VPNs hide all of your online activity from prying eyes. Be sure to read our reviews of the best VPNs to learn all about these affordable and easy-to-use services. 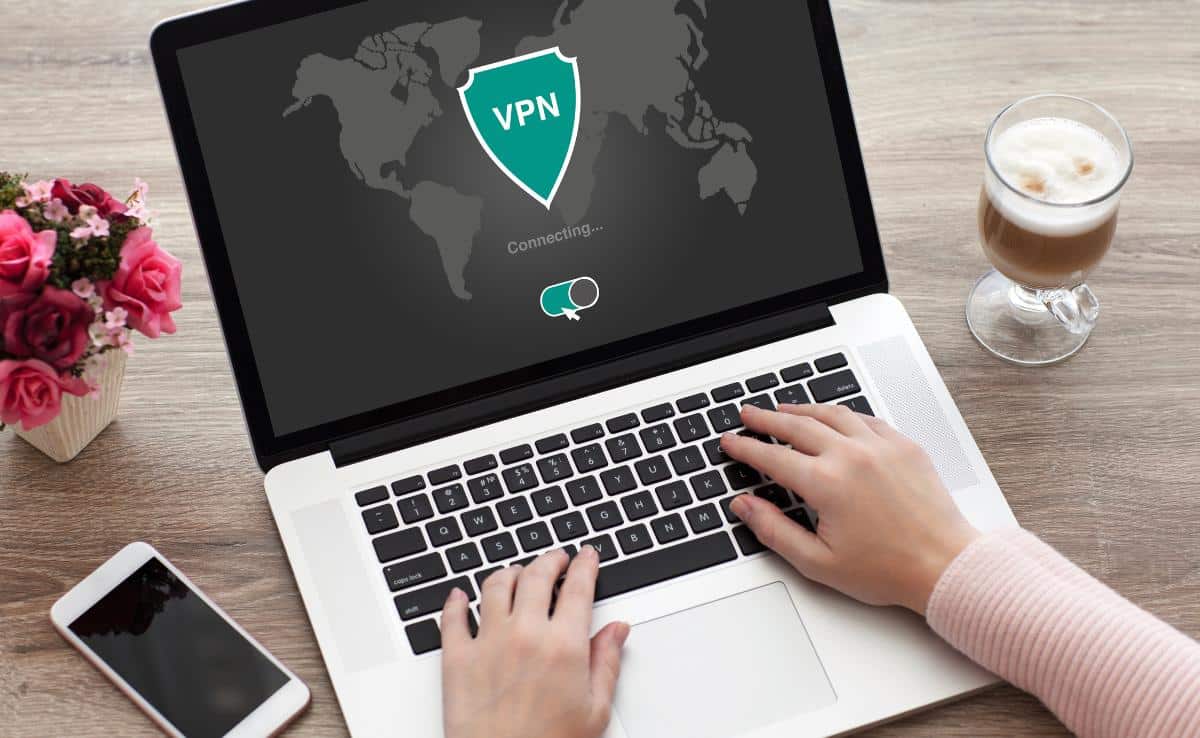