How To Prevent School Shootings 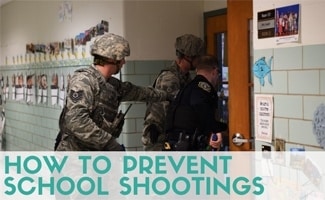 Sending your child to school is a huge milestone. It’s a very exciting time, but it can also cause parents some anxiety. There’s no way to avoid hearing about the increased amount of gun violence in schools. It’s happening with more frequency, and the media is quick to cover these occurrences.

According to Everytown for Gun Safety1, between 2013 and 2018, 260 incidences of gunfire were identified on the grounds of elementary, middle and high schools in the U.S. These incidences resulted in 109 deaths and 219 injuries. These statistics are frightening and emphasize the need to prevent school shootings and make school safety a priority.

How To Reduce Gun Violence In Schools

In 2019, Everytown for Gun Safety, The National Education Association (NEA) and The American Federation of Teachers (AFT) collaborated to produce Keeping Our Schools Safe: A Plan to Stop Mass Shooting and End Gun Violence in American Schools.

This document outlines the need for state and federal policies that will work to reduce gun violence. It also discusses threat identification, security upgrades, emergency planning and the need for creating safe school environments to prevent school shootings. These organizations are also very clear about the need to prevent schools from arming teachers — and why this actually poses more of a risk.

From a legislative standpoint, they recommend:

All of these laws are gun violence prevention policies that could prevent a prospective shooter from gaining access to a gun.

School-based intervention is another way to prevent school shootings outlined in the document. They suggest:

When school-based intervention works hand-in-hand with legislative initiatives, school shooting prevention can be the most successful.

One of these organizations is Moms Demand Action for Gun Sense in America,2 formed by Shannon Watts, a mom who could no longer sit back and watch children in this country be affected by gun violence. What started as a Facebook page has become an organization with nearly 6 million members and chapters in every state.

They are playing an essential role in preventing school shootings by working to pass stronger gun laws and to close the loopholes that jeopardize the safety of all Americans. They also provide community programs that encourage a culture of responsible gun ownership like the Be SMART Program.3

There is also a branch of this group, Students Demand Action,4 created by and for teens and young adults, that helps them channel their passion for fighting against gun violence.

The other organization is Sandy Hook Promise,5 a non-profit founded and led by family members who lost loved ones during the Sandy Hook Elementary School shooting. They work to honor the lives lost in that horrible event by providing programs and practices that protect children and prevent tragedy.

In addition to advocating for sensible gun legislation, they are well-known for providing free child-focused programs that promote inclusion. There are also programs to teach children to look for signs and signals of potential violent acts among their peers so they can say something before an act of violence takes place.

Sandy Hook Promise has also created the Say Something Anonymous Reporting System6 that’s is available to school systems nationwide. It allows students, staff and parents to submit safety concerns in order to identify and intervene with at-risk individuals before they hurt themselves or someone else. It has rolled out statewide in Pennsylvania and was recently adopted in North Carolina as well.

There is so much we can do to make schools safer. We all need to work together to achieve that goal. If you want to be a part of the solution, there are so many ways to help.

We can all play a role in preventing school shootings and being responsible about guns in our communities. Read more in our guide to gun safety.

What are you doing to help prevent school shootings in your community?

About The Author: Julie Fritz

Julie has been writing professionally since 2012. She is an active volunteer for a local arm of Everytown for Gun Safety, the largest gun violence prevention organization in the country. Everytown does comprehensive research on gun violence and makes recommendations on how we can all make our communities safer. Her involvement with this organization has given her invaluable information about how to keep our kids safe.

She enjoys writing not only about gun safety, but from family-related content to informative articles about technology, events and healthcare. In her free time, you might find her hiking, trail running, biking or swimming. You might also find her in the kitchen where she loves to cook and bake.