VPNs: How Can I Protect Myself From Hackers? 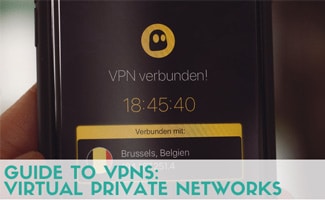 Who’s really watching you when you’re online? These days, it’s virtually impossible to know. What can you do to protect your privacy and identity? Using a Virtual Private Network (VPN) service on your computer and mobile devices is a no-brainer, especially when you’re on public WiFi or traveling. For a low monthly fee and easy installation, you can protect yourself from Big Brother.

Why Do I Need A VPN Service?

A VPN service acts as an invisible cloak that shields your online use from virtual peeping toms. In more technical terms, a VPN service creates a secure, encrypted connection, often referred to as a tunnel, that lets you use the public internet in private. What can a VPN do for you?

How Do VPNs Work?

The internet-enabled device you are using (smartphone, laptop, etc.) must have a VPN app or software loaded onto it. The VPN software connects your device to the VPN server, which encrypts your connection and secures it to help keep you anonymous online.

Everything you do online goes to the VPN first — from your online banking to browsing the news. Your data shows up to the internet service provider as coming from the VPN and not from your computer and location. Without a VPN, your data is out in the open, vulnerable to peeking eyes.

Check out this video from CyberGhost to get more details about how a VPN works and the benefits you’ll enjoy from signing up.

We’ve reviewed the Best VPN Services and ranked our top picks. Our article covers how VPNs work, and we have pros and cons for each service discussed. We also include a table so you can compare providers by price and features.

We’ve also reviewed the top providers more thoroughly and gone in depth with pros, cons, and consumer feedback. Check out our reviews of PureVPN, CyberGhost, IPVanish and Private Internet Access.

Once you’ve chosen your VPN and signed up for it, we’ll take you step-by-step through the process of How To Set Up A VPN on your computer (Mac or PC), smartphone (Android or iPhone), iPad or on your home server. (Yes, we recommend you protect yourself on all your devices!)

If you decide this protection is no longer for you, we also have a guide on deleting a VPN.

Do I Need A VPN Router?

Routers come with some security features to prevent hackers from gaining access to your data, but a VPN Router is especially configured to work with your VPN for added security. It can help keep criminals out of your “digital” walls and protect your devices from Peeping Toms.

Our VPN Router review includes what features your router should have, and which ones are best for gaming and other categories.

How Do I Know If I’m Protected?

We’ve had some readers ask us how to tell if the VPN is actually working — most providers have an app or service with icons indicating your level of protection. Some even offer extensive statistics such as data sent and received while on the VPN.

The most obvious way to directly tell if you’re on a VPN is to check and see if your IP address changed. Visit WhatIsMyIP to check before and after you connect. If you need help setting up your VPN, we have a step by step guide.

While shopping around for a VPN provider, you may have noticed some sites that warn against using a U.S.-based company. So, what’s the deal? Are you okay going with a company that’s headquartered in the U.S.? The short answer is yes, as long as the VPN provider has a strict no log policy that you can trust.

Why is this even an issue? Some people are concerned about the U.S.’s involvement in the Five Eyes Alliance, the world’s leading intelligence-sharing network. So, any online activity or data passing through and stored on VPN systems headquartered in the U.S. is subject to the surveillance protocols implemented by Five Eyes. (Other Alliance members include the U.K., Canada, New Zealand and Australia.)

Don’t understand some of the high-tech VPN lingo we’ve included in our VPN reviews? No worries! We’ve broken down all the need-to-know techie terms below.

There are several VPN protocols that secure your data transport over a public network, and each protocol varies in how it keeps your data secure. Here’s a breakdown of the different protocol types.

Will A VPN Alone Keep Me Safe?

Signing up for a VPN isn’t the only thing you’ll need to stay safe in the digital landscape we live in. We’ve written an entire article dedicated to Public WiFi Security Tips. You can utilize these tips at the coffee shop, at your hotel when you’re traveling, at the airport and other public places.

Want to hear straight from the horse’s mouth about VPNs? We interview Amit Bareket, CEO and founder of SaferVPN. He tells you how to stay safe online and where he sees the future of VPNs going. You’ll also get an insight look into the company and how things work inside a VPN office.

Have you ever been hacked?