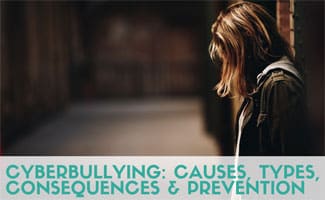 Cyberbullying takes place online and is a form of violence, often against kids. It can cause lasting damage to victims, and should not be tolerated by anyone. It’s important to speak to children about cyberbullying and provide them a safe space to discuss any concerns openly.

Below are several shocking stats on cyberbullying. All data that has been noted with a 1 is based on a nationally-representative sample of 5,700 U.S. middle and high school students (ages 12-17) between July and October of 2016. Those noted with a 2 are a bit older, with sources dating back to 2014.

Want more statistics? We’ve got a dedicated article that covers cyberbullying statistics by state, including the friendliest and meanest for cyberbullying, 5 must-know stats for parents, and more.

What Are The Primary Causes Of Cyberbullying?

It doesn’t matter what type of bullying we’re talking about, if a child has been bullied, they are more likely to respond by bullying another person. In these cases, the child feels that their actions are justified because they’ve gone through it themselves. The child may go after their bully or another child who they see as weak.

2. The Victim “Deserves” It

Cyberbullies target students based on the school’s social hierarchy. Examples may include a jock cyberbullying a student who excels academically because they are jealous of the student’s success. Another example may be a student who is envious of another student because of who they’re dating. Cyberbullies feel the student deserves to be treated this way, so they don’t feel guilty.

Cyberbullies target others to add some entertainment to their lives. They may also be seeking out attention from their parents. Instead of being entertained through a positive outlet (school activities, spending time outside, finding a hobby, etc.), the cyberbully turns to the internet to stir up some drama.

Cyberbullies want to fit in just like any other child. They want to fit in with a group of friends or clique. They may think that there won’t be consequences since there is “strength in numbers,” but this is not true.

Cyberbullies think that since it is over the internet, they are safe from consequences. The cyberbully doesn’t see the child’s reaction to their actions, which makes it easier for the cyberbully to continue this behavior. It is easier for a child to cyberbully than bully face-to-face because of the anonymity.

What Are The Consequences Of Cyberbullying?

Victims of cyberbullying may experience the following consequences:

Cyberbullies may experience the following consequences:

How Can You Prevent Cyberbullying?

Here are some useful tips to keep handy. Feel free to reference and share.

What Should I Do If I’m Being Cyberbullied?

If you are the victim of cyberbullying, find an adult you are comfortable with and open up to them about it. Ask for help, and don’t keep your feelings bottled up inside. Having someone to talk to about it can help you feel less alone and you can create a plan to make it stop.

Parents, if you think your child is a victim of cyberbullying, you may want to consider monitoring their phone and online activity. Have an open discussion with them and learn more about family tracking apps.

Have you, or has someone you know, been cyberbullied? Were you able to stop it?