Smart Home Protocols: Zigbee vs Z-Wave vs Insteon vs X10 vs KNX vs Bluetooth 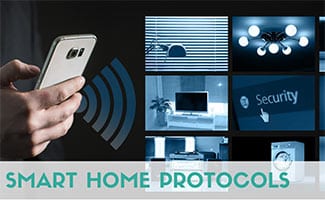 Want to automate all of your home’s lights, appliances and other devices but not sure where to start? Turning your house into a smart home takes some planning, and the first thing you want to consider is which smart home protocol you’ll use.

A smart home protocol, also called a home automation protocol, is the unique language devices use to communicate with one another. These communication signals trigger desired actions, i.e., adjusting your thermostat or turning your lights on or off.

Of course, there isn’t a universal protocol that all smart devices use. Not all smart devices play well with others because they speak different languages. So before you start buying random products, you should consider the protocol(s) you’ll want to use in your home to streamline your home automation. There are a handful to choose from, and each has its pros and cons.

Essentially, there two major protocols that dominate today’s market — Z-Wave and Zigbee. They’re very similar in the way the systems operate, but there are some key differences between the two.

As you add additional devices, this relay system continues to strengthen the reliability and range of the entire network in your home. Zigbee is also highly efficient when it comes to energy consumption, extending the battery life of all of your smart devices.

There are some potential drawbacks to this protocol, especially when compared to Z-Wave. Zigbee 3.0 operates on the 2.4Ghz band so it can run into some congestion problems with your home’s WiFi network and WiFi devices. This can result in dropped signals.

Zigbee devices also frequently have difficulty communicating with devices that aren’t Zigbee-certified. It’s a closed-source protocol, meaning that smart device manufacturers must obtain a license to use Zigbee (unlike Z-Wave, which is open-source). Therefore, there are many more devices that are Z-Wave compatible.

Home security companies like Ring Alarm, Brinks, Abode and Scout Alarm are compatible with both Z-Wave and Zigbee products.

Z-Wave is very similar to Zigbee in that it uses a mesh network setup that strengthens as you add more devices. Although it’s not quite as fast and power-efficient as Zigbee, those differences are fairly minimal. And Z-Wave has a couple of definite advantages over Zigbee.

As we mentioned above, Z-Wave’s open-source availability allows software developers to integrate Z-Wave into devices with fewer restrictions than Zigbee and other smart home communication protocols. So you’ll find a much larger number of smart devices that are fully compatible with Z-Wave.

Another advantage is that Z-Wave operates on the 800-900 MHz range of frequencies, so it doesn’t battle the potential congestion over the 2.4GHz band that Zigbee can face. This frees up Z-Wave to be a stronger, more reliable network.

What Is Z-Wave Plus?

Z-Wave Plus is the latest generation (Gen 5) of Z-Wave. This new generation enhances the user experience with easier installation, a longer range (up to 200 feet), 50% more battery life, more bandwidth and other enhanced features. You can easily sync all Z-Wave and Z-Wave Plus devices together in your home.

Can You Use Z-Wave & Zigbee Together?

It’s not an absolute that you have to stick to one single protocol, but the devices may not communicate directly with one another. If you want to use Z-Wave, Zigbee and other protocols in the same home, it’s a good idea to invest in a smart home hub that supports multiple protocols. Otherwise, you could face some communication problems. Samsung’s SmartThings hub and the Wink hub support both

Another option, if you’re interested in a home security system, is to invest in a system that has both Zigbee and Z-Wave compatibility. Ring Alarm, Brinks, Abode and Scout Alarm all allow Zigbee and Z-Wave devices, which you can control through the respective security company apps.

Several other home automation protocols are still in use, although they’re not as widely known as Zigbee and Z-Wave. We wanted to include these in case you’re considering alternatives.

X10 is the oldest home automation protocol, developed back in the 1970s. It uses your home’s power lines for communication between devices, so it doesn’t require any additional wiring. However, X10 systems are subject to circuit interference (line noise) from other electrical devices in your home, which can cause signal drops.

X10-enabled devices usually plug into power outlets, and you can control them locally or by remote control. The protocol isn’t as sophisticated as newer technology, so the types of commands you can perform are very limited. For example, it can’t select a channel on your TV. And if you’re concerned about hackers, this non-encrypted protocol isn’t for you.

Founded in 2005, Insteon is a dual-mesh network that uses both your home’s power lines and a wireless network (radio frequencies) for message transmission, which results in an extremely reliable and flexible system. Each device has a unique ID and acts as a controller, receiver and repeater, which boosts the strength of the entire network.

Insteon is highly secure and supports over 65,000 different commands. You can control your devices locally, via native smartphone apps or by voice commands. Insteon is also compatible with X10, so it can be a great option if you want to upgrade your old X10 system.

Primarily used in commercial buildings these days, KNX first hit the technology scene in Europe in the late 1990s. The system is somewhat similar to Insteon (that can use both power lines and radio frequencies), but it also supports command transmissions over wireless infrared, twisted pair wiring and ethernet cables.

The ideal setup for KNX involves twisted-pair wiring to eliminate electrical interference. But the issue with this setup is that it requires you to install new wiring throughout your entire home, unlike the other protocols we discuss here. We recommend that you go with other automation protocols that are better suited for homes.

What About Bluetooth And WiFi? 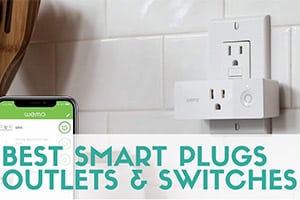 Bluetooth and WiFi aren’t specifically designed for smart home automation, but you’ll still see many smart switches, thermostats and other smart devices that use WiFi and Bluetooth.

The problem with depending on WiFi and Bluetooth as your sole home automation protocol (especially if you have a ton of devices) is that both require a lot of energy to operate (they drain batteries quickly). And if you have many WiFi smart home devices, they hog the 2.4Ghz band (the radio space they need to communicate effectively). This can result in the dreaded dropped signals we all hate.

If you’re not sold on one whole-home protocol, we’ve got reviews of various smart home devices that use a variety of protocols, including security systems, smart speakers/virtual assistants and light bulbs. Our reviews include our top picks as well as pros and cons, features, pricing and more. Many of the devices in these reviews sync with the smart home hubs we mentioned above.

And before you start buying products, you should also read our ultimate guide on turning your house into a smart home.

Are you planning on automating your whole home or just a few select devices?